CORRECTING BLIND SPOTS IN MINE TRUCK AND LOADER EXTERIOR MIRRORS

Mirror technology used in mine truck and loader mirrors has not changed since it was applied to the first Euclid mine truck built in 1930. Mirror technology that was being used for regular commercial vehicles was simply applied to the large trucks and loaders without regard to the special requirements the size of these vehicles imposed on the mirrors.The result was the creation of two large blind areas in the operator’s visibility of areas surrounding the immediate vicinity of the machine: specifically, the horizontal plane area out from the side of the vehicle and the vertical plane blind spot along the immediate side of the truck.

The topic of blind areas has received a great deal of attention in recent years, due in large part to the globalization of the miningindustryand the possibleapplication of international standards in this market. Manufacturers who did not have to  worry about issues such as field of view for the operator of the equipment theyare sending to other countries now have to be concerned, as the country of destination might be a country that applies the ISO standards to all equipment it receives.

ISO Standard 5006 sets forth a test method and performance criteria for the operator’s field of view that adequately displays the operator’s horizontal plane blind spot. The standard has been applied to most of the equipment used in mines and illustrations of its application have been documented.

In 2006, Dr. John Steel of the University of Denver completed his study of five types of mine equipment applying the principles of ISO5006 and provided his results to NIOSH (Contract 200-2005-M12695). Dr. Steele’s illustration for a Euclid EH 4500 haul truck shows the following:

The truck is equipped with factory exterior mirrors. Without them, the driver cannot see the ground until 16 feet out from the side of the truck on the driver’s sideand 105 feet out on the passenger side. When mirrors are used, there is no difference.

With no mirrors, the driver has a blind area almost 50 feet out from the front of the truck that remains the same after the mirrors are attached. Exterior mirrors provide a partial view on the horizontal plane but majorcomplaints of drivers are that the view is not wide enough to accommodate increased production demands and the need for fast placement of the vehicle for loading and thatthey are unable to distinguish where objects are located in relation to the truck, due to distortion.

The ISO standards do not set a method to be used to illustrate the vertical blind spot and probably the best way would be to use a 3D analysis. Sitting in the driver’s seat and moving a cone forward from the rear of the truck to where it can first be seen by the driver gives an approximation of this blind spot. In the following illustration, the ground could not be seen until 30  feet behind thetruck, so the blind area can be approximated as per the illustration.

When one considers that the mirrors on the typical mine truck are some 15-20 feet off the ground, the dangerous nature of the size of this blind spot and the number and type of possible pieces of equipment that could be in this blind spot and  unseen by the driver become very apparent. Further, this blind spot precludes the driver from seeing the ground area near the front wheels, which can often make the difference between staying on the haul road or veering from it. This blind spot would also preclude the operator from seeingdangerous rocks or other objects that could be destructive to the tires and/or truck being driven.

To resolve the problem OEMs now make a decision to mirror their vehicles with mirrors that are a compromise between view afforded and amount of distortion in images. The operator is left with a mirror that will still leave blind areas surrounding the truck and will contain a level of distortion of images because of the selection of the rate of curvature made by the OEM. Procurement people must educate themselves for new acquisitions. Safety/maintenance personnel must  educate themselves forretro situations because mirrortechnology now exists that can be used to show the operator the front proximity area of the truck, both sides of the truck (including the critical areas by the front tires), a wide enough view  to see the necessary area out from the side of the truck for easy loading and to provide all of this without the problem of distortion. It is the responsibility of these people to demand what their drivers need for safe operation of the equipment. 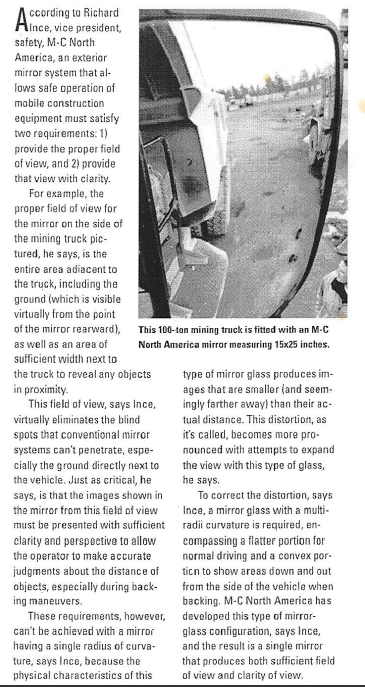 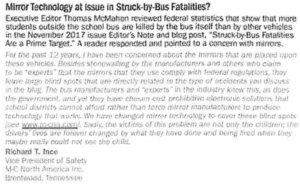